I’m Kel McLean,  born April the 24th 1973.  The second of twins, I contracted Cerebral Palsy due to lack of oxygen to the brain caused by the cord wrapped round my neck. 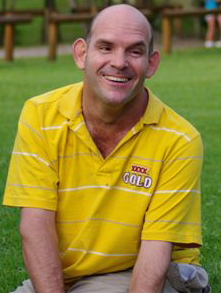 My twin brother came into the world healthy and able bodied.  Our big sister was born 2 years before.
I lived in my own little world for the first 15 months, I didn’t respond to anyone and I didn’t like to be picked up and cuddled.    My parents decided to take me to America to a clinic for children with Cerebral Palsy where they constructed a program of exercises which helped me to interact with my family and friends.

I attended the Bundaberg Special School for 7 years which I disliked, because the school catered mainly for students who had a learning disability.  I could understand what was being taught immediately, so therefore I felt intellectually isolated.

In 1987 I started my secondary education at Shalom Catholic College of which I enjoyed the 3 years there, mostly because the teachers taught me at my intellect level which was much the same as my fellow classmates, and I was treated as an equal.

I found talking to and making new friends very satisfying as we’d talk about what any school-kid would.  At the Special school I would get frustrated talking to some students who would talk silly things of which I had little or no interest.  At both schools I had 2 teacher aides who assisted with my schoolwork, feeding me and toileting.

I left school after year 10. I then went onto do various courses from computer and small business, to art and writing.
I took up writing in 1991. I had a couple of articles published in local newspapers, I also received an encouragement award at the Childers Art & Craft Bazaar Writing Competition where I wrote a short story called “My First 19 Years of Life.”

During the 1990’s I wrote a screen play about a young man with Cerebral Palsy and his girlfriend. I sent the script to a number of production companies and producers but there unfortunately was no successful outcome.

After 2 years of waiting (which seemed like an eternity), I moved into my own unit in January 2001.  This was one of my biggest achievements in my life.  I have always wanted to move out of home since seeing my brother and sister move out a few years before.  It took a long time until Mum and I discovered I could live by myself.

I live fairly independently; I have support with my meals, some personal care and some outings.  I am an active member of the local Apex club of which I’m currently the treasurer and the dinner notice editor.  I like spending time with family and friends, going to Clubs occasionally, watching sport and listening to music.