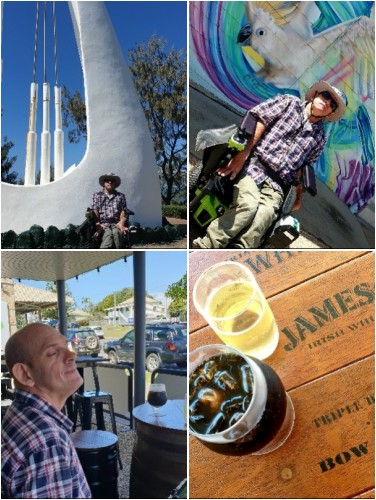 If you haven’t been to the quiet sea side town of Emu Park then you are missing out. The ANZAC historical walk is a relatively recent installment and a great way to be educated about the diggers who protected the area in a relaxing fashion. At the top of the walk you’ll see the Captain Cook Singing Ship (as seen here) which portrays Cook’s discovery of Emu Park in May 1770. True to its name the monument ‘sings’ as the wind blows through its harmonic pipes. In 1970 a time capsule was placed not far from the ship, its contents unknown..at least to me! Trendy cafe’s and food bars are popping up and one that opened just 2weeks ago, FortySeven10 Burger Bar, I had the pleasure of dining at and look forward to going back. 4710 is the postcode for Emu Park for all those that don’t know! Other attractions of Emu Park include the Bell Park markets which is on every 3rd Sunday of the month and is quite sizeable. Can’t forget the glorious beaches, decent playgrounds and an Emu trail walk that tells you about the history of the area. Emu Park is quite an artsy town and you can see some of the local talents work at the brand new art gallery. Numbers swell in October when lederhosens are dusted off and steins begins to flow at the Oktoberfest. This is just a smidge of what goes on in Emu Park and I can’t recommend enough it’s a destination worth seeking out. Here’s a clip by Aussie country music singer Tony Cook paying tribute to ANZACs past and present in his music. You’ll see footage of the memorial trail in Emu Park featured. https://www.youtube.com/watch?v=jvbfCweuXX4

Previous: Village Festival 2021
Next: I met Alex Lloyd at the Moura Coal and Country Festival