My Bid for Brisbane to host the 2021 NRL Grand Final. 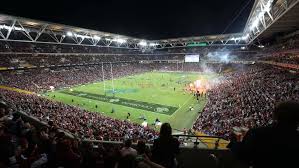 For 15 months I have been campaigning for have the NRL Grand Final at Suncorp Stadium in 2021, after former NRL Chairman, Peter Beatie hinted Brisbane had a chance by saying, “Well, there’s always 2021.” On 9 News in June 2019. I thought I’ll explore this remote possibility because usually Brisbane is no chance of hosting the Big Dance despite Queensland has proven without doubt that the state has incredible achievements in rugby league over 30 years. Including 6 premierships for the Brisbane Broncos and N Q Cowboys has one, and between 2006 – 2017 the Magnificent Queensland Maroons absolutely smashed The NSW Blues in the State Of Origin, 11 from 12 series wins. Brisbane has only hosted a rugby league Grand Final in 1997 when The Broncos beat Conulla Sharks in Super League. It’s just not “Footy.”

Last year I emailed Peter Beatie regarding Brisbane hosting the 2021 Grand Final but SCG is suppose to host the GF. Last month the AFL announced their Grand Final will be held at the GABBA next month because Queensland housed 10 Victorian’s teams while Victoria was in locked down. Like Chris Lynn, I went into bat for Queensland by contacting The Chairman of the NRL, Peter V’andys.

My real dream is for 3 Gfs in 3 cities in 3 years. For example 2021 in Brisbane, 2022 in Sydney and 2023 in Melbourne to reward the dedicated and loyal fans in Qld, NSW & VIC. Brisbane Broncos, N Q Cowboys & Melbourne Storm will be very excited to attend a Grand Final in their Capital city for first time this century.

I have an idea to enhance the success of Brisbane hosting the Grand Final. I propose that the NRL conduct a big Qld fan day on the Saturday prior to the GF. Have a parade of Premierships teams such as 1992 & 93 Broncos team, 1997 Broncos (Super league),1998, 2000 & 2006 Broncos teams to be led by Wayne Bennett, 2015 N Q Cowboys & Broncos (because it was a great GF) to be lead J T & Cory Parker. Mal Melinga & Cameron Smith to lead out players from 2006 to 2017 Maroons team, The Greatest QLD Origin Team ever. The two 2021 Grand Finalists, hopefully, Gold Coast Titans and N Q Cowboys.

The main event will be the best concert ever. The fans would really love to see Keith Urban & Barry Gibb because Keith grew up in Caboolture and Barry with his brothers, Maurice & Robin were raised in Redcliffe. These Queensland boys became musical Superstars. John Farnham who in 1986 recorded the most powerful song, “You’re The Voice”. Lee Kernaghan, if Slim Dusty was the Grandfather of Aussie Country Music, Lee’s the Father. And Savage Garden, the most successful Qld bands of the 1990s. I’d really love The Dixie Chicks who recorded their mega hit “I’m Not Ready To Make Nice” in 2002, plus Kasey Chambers and Chrisie Lamb.

Last Wednesday I wrote to the Sports Minister, Katte Jone, requesting The Qld government’s unconditional support for my very bold proposal by writing to Mr. V”andys to back my ambition, for the benefit of Queensland fans who passionately love the fantastic game of rugby league.

Previous: Rocky Swap
Next: My Chat with James Blundall