I met the best halfback

Monday night June 27th 2016 while travelling round North Queensland my mate Reg & I bought tickets for the NRL match between The N Q Cowboys and The Manly Seaeagles in Townsville.  Our motel was walking distance to the Cowboys Leagues Club.  We made our way there, waited for one of the free buses which take fans to 1300 Smiles Stadium, a 20 minute drive. 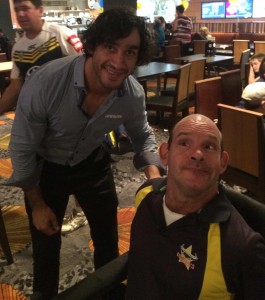 When we arrived at the stadium there were some of the cheer leaders, people could get photos with the girls and Reg took a photo of me with the girls.  Reg and I scrolled round the stadium, searching for our seats which turned out to be on top the grassed hill at an end of the ground, we were situated towards sideline adjacent to the try line. Reg & I enjoyed couple of alcoholic beverages and dagwood dogs with chips before the cheer leader formed a human tunnel for the rugby league players run through onto the ground, the ref blew his whistle and it was game on.

It was a great game, The Cowboys shot to a ten – nil lead, the Seaeagles /crawled back twice but the Cowboys were to good, the final score was thirty to twenty-six.  After the game while waiting for the bus to go back to the leagues club, a man’s voice called out “Hey Kel” I looked over and Anthony Pernell walked to me.  Anthony was in Apex about twelve or more years ago.  His son was playing in a footy carnival over the weekend.  Anthony works at the mines in Emerald which he has been there four eleven years.

The bus returned us to the leagues club where The Cowboys had their presentation of player of the match, Jason Taumalolo.   Paul Green walked on stage and gave his coach’s report.  Reg ordered couple of drinks at the bar, he bumped into Jonathon Throuston, and said, “There’s a bloke in a wheelchair over there, he’d love to meet to you.”  Jono  said “Give me few minutes and I’ll be over.”    Reg & I was having a drink at the table, to my surprise, Jonathon came up and said “I’m J T” shook my hand & signed my Cowboys shirt.   Reg and I left the club soon after because we were driving to Rockhampton the next day.

Previous: The Attitudes Toward Premature Death
Next: Gladstone Multi-Cultural Festival