It has been a year since Ken Davis was tragically killed when his motorcycle and another man on a motorcycle were hit by a four wheel drive being driven by woman, south of Childers.  The other rider was taken to hospital with non-life-threatening injuries.
I had known The 72 year-old owner of Walla St Motorcycle’s owner for over 15 years.  Ken used to play sport which my family was involved with.  Ken was a softly spoken man and had a good sense of humor.
Ken’s big passion was motor    bikes, a passion which he enjoyed for 50 years.  He set up his own business KB Motorcycles with wife Barbara and Ken was a well-respected mentor to speedway riders.  My mother’s friend used to own a cane farm at Bucca (north of Bundaberg) in the mid-1990s Ken used to service the friend’s Harvey Davidson and four wheel motorbikes which my twin brother (who worked on the farm) and I used to ride them round the property.
Ken and Barbara sold the business and retied.  But Ken’s passion for working with motorbikes never retired, it wasn’t long before he opened the doors for business at the same location but trading as “Walla Street Motorcycles”….  I collect old registration stickers, once a month I’d call into the shop and asked if Ken had any old stickers or I noticed an old one on a bike, I’d show it to Ken and he took the sticker for me.  Now his daughter, Kayleen Bryan saves rego stickers for me. 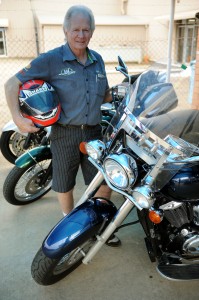 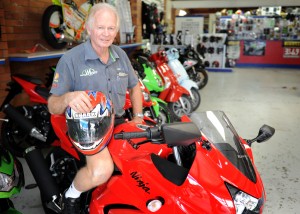 Previous: Should The Disability Insurance Scheme Be a Part of Medibank?
Next: Gympie Muster 2012